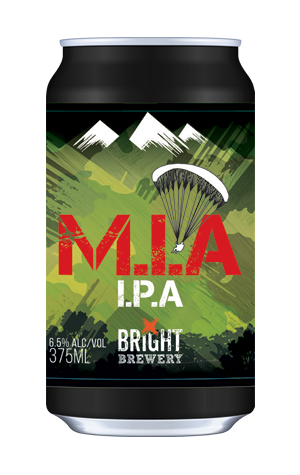 Way back in the Paleozoic era (well, something like 2012, anyway), the first release of M.I.A. was the moment that tipped us off that Jon Seltin was a brewer to watch. He'd not long been plucked from homebrewing and put straight into the head brewer role at Bright and this IPA – named after an incident that saw him crash land his paraglider and go missing in action the day before it was being launched – was a real statement of intent. The beer, brewer and brewery have all undergone change since then, with Jon moving to Hawkers and now Brick Lane, Bright expanding significantly and now operating two breweries, and M.I.A. tweaked here and there over time.

As summer 2019/20 approaches, it's had arguably its biggest tweak, dropping to a slightly more sensible 6.5 percent ABV and moving into the core range in cans. Brewed with all-American hops Simcoe, Cascade, Citra and Mosaic, it follows the classic West Coast IPA blueprint: the hop character covers bases from pine and pineapple to deep, orangey citrus and hint of the tropical, there's a decent amount of caramel malt to balance, and a bitterness that's lean and resinous. A fine new version of a beer with its only little place within Aussie craft beer history.