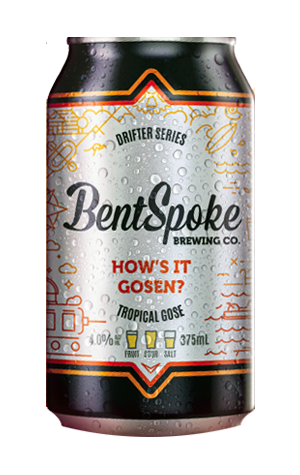 For a brewery (and brewer) that's put out some of the most complex and, on occasion, confronting sour beers to grace Australia palates, BentSpoke's punsome How's It Gosen? is something of a surprise. It's a beer that's been a popular drop on tap at the Braddon brewpub for some time and here becomes their latest Drifter can release in time for summer 2019/20.

And why is it a surprise? Well, mainly because it's so straight down the line, clean and easy-going (which, presumably, was the aim). The fruit character, derived from the addition of mango and passionfruit, is best described as crystalline, while there's little in the way of anything overtly sour. Instead, this a hot weather quaffer that's all about the tropical fruits; imagine a Passiona with a touch of saltiness on the back palate and you'll know how it's gosen.