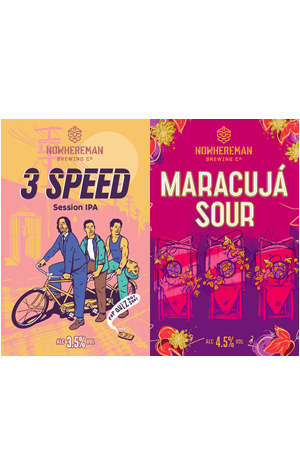 Mid-strength beers can be a tricky proposition. The challenge of achieving enough flavour and aroma while keeping the booze low and everything in balance is a fine art, something that deserves respect, especially if they line up as well as happens here with 3 Speed. It comes with three versions of Keanu Reeves characters riding a bike on the decal – we’ll let you work out who they all are but will say there’s also a nod to a fourth, dude. While joining those dots, the Cascade, Motueka and Idaho 7 trio will be delivering a grapefruit and pine mix with a punchy bitterness that belies the beer's small stature.

As for Maracujá Sour, well, for starters Maracujá is pretty fun to say out loud. It also happens to be Portuguese for passionfruit and if you find yourself in West Leederville you’d do well to say it out loud over the Nowhereman bar. In return, what you’ll receive is a passionfruit gose – 100 kilograms were added – that continues the tropical vibes of the recent Mango Fandango release. Clean, fruity and refreshing, Maracujá Sour has hit with a wave of early hot weather, which seems the perfect time to be brushing up on your Portuguese, sour in hand.