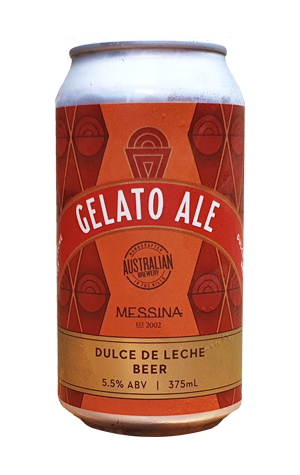 On a hot summer’s day, some people say gelato is the way to keep cool. Others say beer’s the way to go. Australian Brewery and Gelato Messina say: “¿Porque no los dos?”

The two businesses have collaborated to create a beer called Gelato Ale using Messina’s in-house dulce de leche, a sweet caramel-like sauce that’s hugely popular in South America. Dulce de leche is the base of one of Messina’s most popular gelato flavours; they take it so seriously that, when Australia banned the import of dulce de leche from Argentina, Messina sent people to Argentina to perfect the art of making authentic dulce de leche from scratch.

Since dulce de leche’s an ingredient that’s never really been brewed with before, it took Australian Brewery a bit of trial and error to get the recipe right. But head brewer Daniel Shaw says: “Using the dulce de leche to create a flavour profile that pushes the limits of what a beer can taste like has been really exciting for our team.”

The flavours of layered malts and dulce de leche somehow come together exactly how you’d expect, and yet the experience is difficult to anticipate. The rich, reddish caramel beer is thick and silky - almost viscous - which lays the perfect foundation for the creamy sweetness of the dulce de leche. While the sweetness doesn’t overpower, it’s hard not to drink this beer and have memories flood in: of vanilla caramel milkshakes from when you were a kid; of caramel syrup in coffee when you were a teenager; of the first time you had butterscotch schnapps (also when you were a teenager, if we’re being honest).

If you have a sweet tooth, expect to fall in love.