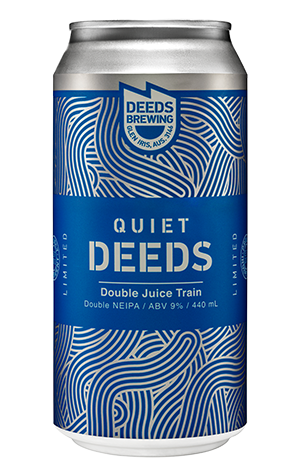 Juice Train was one of the first local New England IPAs to gain a foothold in Australia, predating the current hazy floodgates that have left us drenched in tropical hops. It was also the beer that switched a lot of beer nerds onto Quiet Deeds, showing they were willing to experiment with up-and-coming styles even before their brewery fired up.

Since then, that brewery has opened and Deeds have launched hazy after hazy and seem to have no qualms about how big they make them or how many hops they throw in. To celebrate summer and as an ode to their first hazy boi, Quiet Deeds Double Juice Train has joined the brewery’s long list of releases for 2019.

And, while the beer is substantially bigger than OG Juice Train, it manages to remain as dialled in and drinkable. The Amarillo, Citra, Simcoe and Galaxy produce a fruit bowl mix of orange, passionfruit, guava and lychee with a decent whack of pine. There's a little sweetness from the body too, which as you'd imagine for such a beer is particularly creamy and viscous.