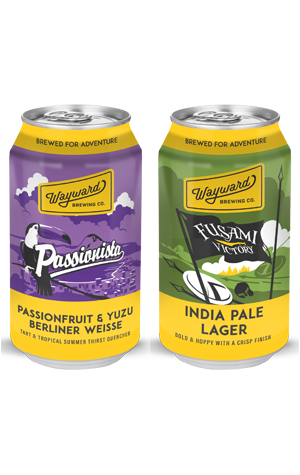 The idea of sour beers being crowd pleasers would have seemed laughable just a few years ago, but no longer. A number of breweries - including Wayward Brewing - now have a sour beer in their core lineup, and more still bring out session-friendly sours with the onset of summer and see the masses go wild. Now Wayward has embraced that further by coining the hashtag #summerofsour for 2019/20.

First brewed in 2017 under a different name - Passion of the Puss, referencing Wayward’s raspberry Berliner Weisse, which was at the time called Sour Puss - Passionista is back and it’s in tinnies. While it uses the same sour wheat base as the raspberry Berliner Weisse, Passionista’s passionfruit and yuzu bring a punchier tartness and tanginess than the core range version. The aroma is a melding of passionfruit and acidic sweet pineapple aroma, while the spritzy carbonation carries a ping of bitter grapefruit, presumably from the yuzu; I, like everyone else I’ve ever met, have never tasted a yuzu.

While India pale lagers haven’t gone gangbusters in the same way sours have, the category of hopped-up lagers is still one that’s been increasing in size in recent times. And for good reason: they have a refreshing cleanness that it’s hard for pale ales to match, but also bring in hoppy goodness for those who crave more flavour.

Fusami Victory captures the heart of an IPA - the aroma is stonefruit hop city - but without the heaviness or the bitter whack hanging around at the end. The light body allows the hops to shine in the mouth; a little malt goes a long way in carrying piney, slightly earthy hop characters along with the fruit. But these hops only leave light footprints as, for the most part, the finish is smooth and Pilsneresque. Yes, “Pilsneresque” is the word I’m going with. Tell the dictionary people they can have that one.