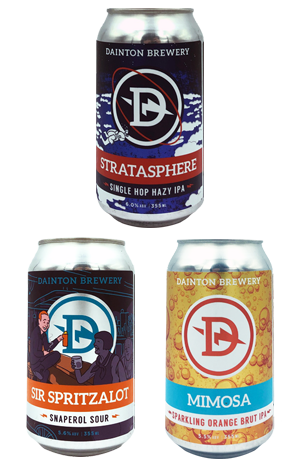 Quite how they're going to maintain their new can every week mission in the long term is one of the more intriguing sub-plots in the Australian beer world right now, but a fondness for cocktail-inspired beers and IPAs of all shapes and sizes seems to be helping keep the well of inspiration topped up. Here, Sir Spritzalot – a "Snaperol Sour" – takes Aperol Spritz as its starting point, as many will over summer, to create a beer with a distinctly cocktail like perfume accompanying its peach and citrus aromas. The sourness is crisp rather than tangy, while I picked up hints of mandarin across the palate in what's a quirky easy-drinker.

Its partner-in-fruit is Mimosa, a Brut IPA with citrus that again serves up a perfume-y aroma, albeit more intense this time around. As for the character, there's citrus (as you'd expect) but also a pot pourri like fragrance and low bitterness.

Eager observers of the beer world will be aware there's a hot new US hop in town. Strata has been described as the US Galaxy due to its potent citrus and tropical abilities, while we've found it can contribute a fair sweetness to early examples brewed here. In the case of Stratasphere, citrus dominates, but it's subdued compared to some recent hazy IPAs from Dainton, both in terms of haze and hop punch. There's some grassy / vegetal hop character in there too, before it wraps up with a resinous bitterness.