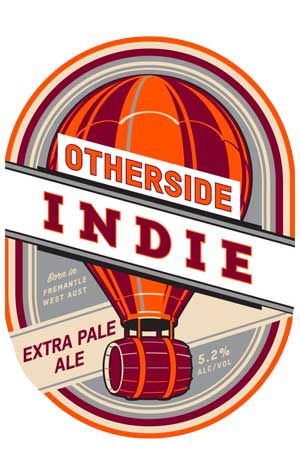 I first heard the term "indie" in 1991. Nirvana were breaking and Sonic Youth were between releasing a pair of overground albums that would influence the 90s American sound and resonate globally. Both had capitalised on hard fought yet building awareness, partly due to a deal with a major label, Geffen Records, which for purists were sell out moves.

But how would I have known? Before hearing the term, the notion there was any other option for a band was foreign to my teenage self, but once understood there would always be an "other".

The same could be said for many of today’s beer consumers. As discussion about beer independence, and transparency on the matter, increases, Otherside have quite literally put the notion on the front of their new core range beer, Indie. Beginning life as an experimental release, Indie has quickly become one of the Myaree brewery’s best-selling beers and it’s easy to see why.

There’s broad, modern appeal inside its near clear golden colour. Tropical mango, passionfruit, papaya and peachy stonefruit invite you in and bitterness remains at sessionable levels, although lifting through what's becoming a signature arid coda in head brewer Rhys Lopez's beers, which is perfect for enjoying at Freo.Social watching the next wave of talent. Can in hand, or in the back of the van, indie is where it all starts.