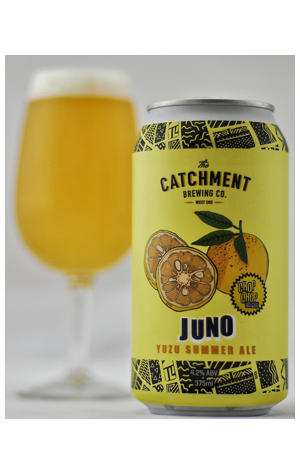 A lot of good things are named Juno, like the Ellen Page movie, the NASA mission to Jupiter, and now this beer. Drawing its name from the scientific name for yuzu, Citrus junos, Catchment’s Juno Yuzu Summer Ale was produced in collaboration with Chop Chop Chang’s, a pan-Asian restaurant serving up delicious plates across the street from Catchment’s West End home. The yuzu is a citrus fruit originating in China, introduced to both Japan and Korea during the Tang dynasty that has become a firm favourite, well-used in both Japanese and Korean cuisine, and these days finding its way into a fair few beers.

Packaged in a lovely lemon yellow can with an illustration of yuzu on the front, this summer ale pours a beautiful buttery yellow. Scents of yuzu waft up to your nose immediately, and there’s plenty more zesty, slightly sherbet, lemony yuzu to be found on the palate as well. There’s also a little breadiness and a light bitterness to round it out, making for a very refreshing ale. It’s also, as you’d expect, a great accompaniment to the pan-Asian flavours being dished up at Chop Chop Chang’s, and yet another beer well adapted to the Brisbane climate by the team at Catchment.