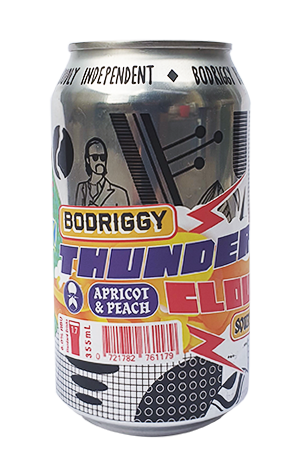 Different approaches to sours and IPAs have been floating across Bodriggy's taps since the doors of their brewpub opened in August and, to see out the year, the Abbotsford brewers have combined those two passions to create Thundercloud. The apricot and peach sour IPA tinnie aims to strike the palate with a mix of tropical hop flavours from Simcoe, El Dorado and Rakau and follow up with a rolling thunder in the shape of tartness.

Pouring it, my first thought first thought was: “This is definitely a can of juice” and a sniff of the aromas resulting in the second thought being: “Yep, this definitely juice.” Drink it down and the beer’s soft and slightly thick mouthfeel moves it further into juice territory and you’ll find a light acidity, with the upfront apricot and peach contributing to the beer’s tart twang. Beyond those flavours, the hops also seem to contribute a mix of passionfruit and citrus with next to no bitterness to be found in the beer's finish.