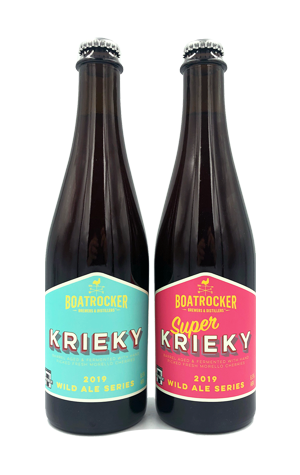 Why put one kriek on the dinner table when you can have two? As 2019 draws to a close, the sour side of Boatrocker's barrel program has served up a few more treats for people who like some pucker with their supping, including a pair of barrel-aged wild ales fermented with hand-picked fresh Morello cherries.

I'll admit that upon opening the delivery from the Braeside brewery I assumed Super Krieky would be an imperial version of Krieky; however, it turns out they both weigh in at 6.5 percent ABV, it's just that Super comes with more cherries and, as brewery co-founder Matt Houghton puts it, may require enamel replacement.

Given their similarities in genesis – a blend of barrels aged between 12 and 24 months before spending two months on cherries – there are similarities in the glass. Both pour a vibrant crimson colour, with Super's red that bit deeper, and both fire off plenty of sour cherry aromas atop a hint of bready malt. That said, the latter is tougher to detect in the Super due to the greater intensity of the fruit character, palate-quenching acidity and puckering dryness. If anything, there's a little more sweetness in Super too, although they're very much of a piece; even the bigger experience sits well within the bounds of enjoyment for sour beer aficionados rather than rather than being a wild ale equivalent of the palate-shredding IBU arms race of the earlier half of the decade.