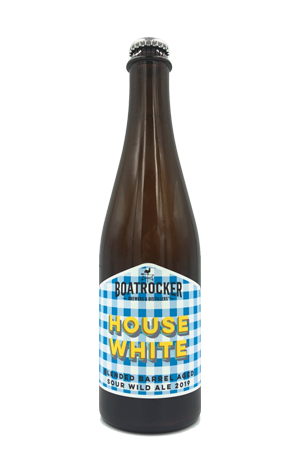 Boatrocker's House Red has been out for a couple of tours of sour beer fans' glasses and fridges already, and now it's got a stablemate in the shape of, you guessed it, House White. It's a blend of 12, 18 and 24 month old barrel-aged beers from the Barrel Room, and I suspect those liquids will have appeared in, or at least be very similar to, some of the sour blonde ales upon which other Boatrocker blends have been built to date.

Here, as much as anything, it's a showcase for the house culture that's been developing over the past five years, one with a distinctive and quenching intensity – sweet and acidic as well as puckering, dry and a little funky. Here, you can add both a potent lemon sherbet character and something reminiscent of chardonnay juice on the palate, while there's a cloud of funk floating around in the background with hints of the host barrels too. Complex, bold and a welcome accompaniment to the House Red.