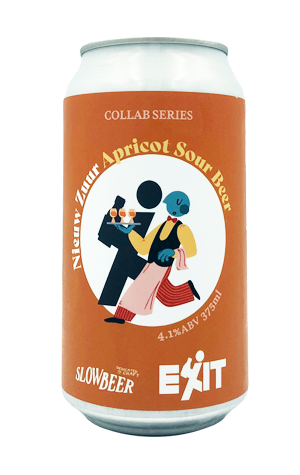 The first sour beer Exit brewed and released commercially was launched at Slowbeer a few years back, when the former were regulars at the latter's former Richmond home. (There have to be better ways of phrasing that bit of background...) So, when they decided to bring the beer back, it was in collaboration with Slowbeer – now operating out of the one bar and bottleshop in Fitzroy – once again.

The name means, simply, "new sour" and in this case is one that's designed as a showcase for apricots. They've tweaked the recipe since that first batch, and also tweaked the look of their limited releases: this can featuring their logo turned into a Belgian waiter gamboling to your table with a tray of beers. The apricots carry through well, with a soft yet very present funk layered beneath. There's a touch of viscosity to the palate, set against a cleansing sourness, while some finger sponge sweetness joins the fruits to taste.

You can imagine it making a good food beer; one to pair with your Christmas pavlova, perhaps.

And other retailers where you find Exit beers