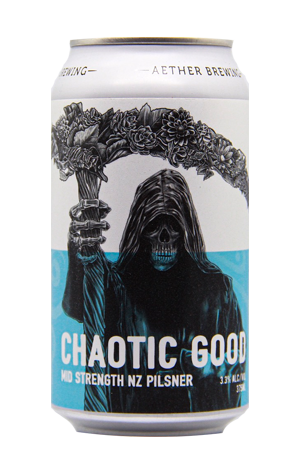 I’ve only played Dungeons & Dragons once; it’s all fun and games until you’re reckless and don’t listen properly and your character dies early on in the game. But I’ve seen enough memes to know that “Chaotic Good” is a reference to the D&D Alignment Chart, which maps out characters according to their morals and worldview. Chaotic Good are happy to break the rules and do things their own way, but are ultimately good-hearted folk. Think Michael Scott from the Office, or Marvel’s Tony Stark, or the Weasley twins from Harry Potter.

I won’t pretend to understand how the Grim Reaper wielding a scythe made of flowers (as seen on this beer’s label) fits that character description. But I reckon this beer does. Aether have taken a European lager style, brought the alcohol right down below traditional pilsner levels, used Aussie malt from Voyager, and thrown in hops from New Zealand, including the experimental Hort 4337.

But for all its rule breaking, this is beer that’s good at heart. Generous dry-hopping has provided a zing of grapefruit, lime and stonefruit to the clean pilsner base. It fits the mid-strength category but retains a nice body and texture; it’s soft rather than thin or watery. Good for a long session of Dungeons & Dragons… though, if you’re like me, you may only need one or two.