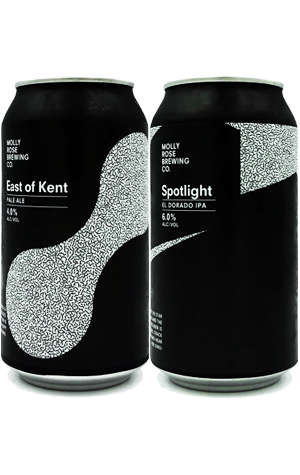 For all that the global craft beer revolution has brought lost styles back to the fore and hungrily created new ones, there is plenty of collateral damage, in part due to a growing willingness by brewers to be led by the wild fancies of the noisiest corners of the market. Among the beers that nobody seems to want to brew or drink anymore are traditional English ales, at least outside the British pubs that retain the passion and knowledge to treat them properly. But Nic Sandery at Molly Rose, as much fascinated historian as brewer of beer – someone who spent time visiting real ale breweries as part of his research trip before launching the brewing company, is eager to keep even a sliver of that tradition alive Down Under.

East of Kent is an all-English creation: English hops, English malts and a fruity English ale yeast. (OK, the water is from Melbourne, but suitably treated for purpose.) Given he doesn't have casks to fill or a hand pump through which to pour, the beer is a force carbonated version of said real ales, but otherwise serves as a reminder of what is being lost. For me, the hops are the star: floral, twiggy and earthy, with a breadth and gentle depth both in flavour and bitterness. There's that English ale malt character I find so hard to define – a little nutty, toasted, bready, but not quite any of those things – while the fruity esters are subservient to the hops. Pick one up, kids: this is where pale ales came from.

As for Spotlight IPA, it's the first can in a series designed to showcase different hop varieties. They're not quite single hop beers – each will feature 20 percent US Cascade "for a bit of support and depth", according to Nic. El Dorado is in the spotlight here, showcasing its vibrant fruity side – from intense tropical fruits to candied berries to something quite perfume like – and contributing an oily mid-palate bitterness. There's a touch of balancing light caramel sweetness, but really it's all about that juicy El Dorado.