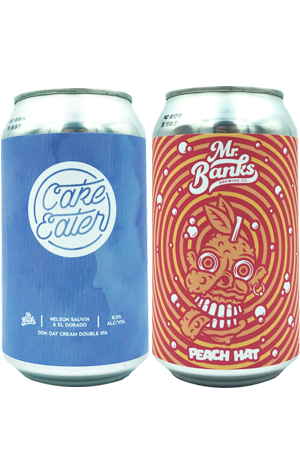 Of the many hazy IPAs and double IPAs released by Mr Banks over the past couple of years, the first iteration of Cake Eater is one of the most popular. It's spawned a Cloudwater-esque series, in which borderline insane amounts of hops are added to an oats 'n' cream double IPA, with the hops in question changing each time. For number three, they've gone with NZ superstar Nelson Sauvin and fruity American variety El Dorado.

If you're familiar with those hops, you'll be going in expecting a tropical fruit fest and, while there are fruits at play, the impact of the lactose softens their punch somewhat, leaving you with stewed stonefruit and pineapple. From within the full, creamy body a boozy prickle rises, setting your lips a-tingling and adding a touch of alcohol-derived spiciness to the mix too.

The second of the pre-Christmas releases from Mr Banks to get a wider release is Peach Hat and it's another that brings lactose to the party. The peach character is so defined it's akin to biting into one: there's fluffy, creamy peach flesh from nose to palate, with a little earthy, peach skin like sourness there as a counterpoint. The label design can play tricks on the eyes, which seems appropriate, as you wouldn't believe a beer this fulsome was only 3.5 percent ABV if the brewers hadn't told you so.