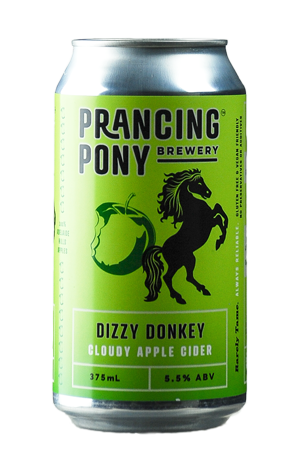 One of many changes at Prancing Pony in the latter months of 2019 was the decision to put a cider into cans as part of their core range. It's an offering that has allowed them to celebrate their home region too, with Dizzy Donkey made from freshly pressed Adelaide Hills apple juice and fermented with a brewer's yeast.

It's as densely cloudy as the most turbid of hazy IPAs and, while it has juicy characteristics like those beers, here they're of the fleshy apple kind. There's a touch of aromatic farmhouse funk at play too, bringing to mind the sort of scrumpies I'd pick up by the flagon from the side of the road as we made our annual pilgrimage to Glastonbury.