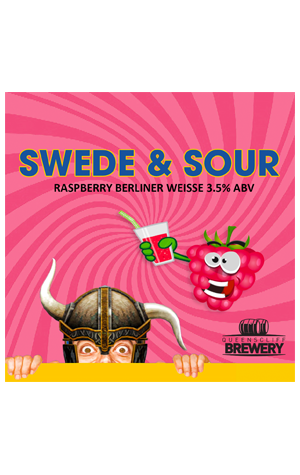 On a small 300 litre brewhouse tucked inside the Queenscliff Brewhouse, head brewer Mattias Isaksson is given a fairly free reign when it comes to what limited release beers he brews. Clearly, he has plenty of control when it comes to naming those beers too, with the brewery’s summer release named Swede & Sour in homage to his home country.

The beer itself is designed for drinking in the warmer weather: a Berliner Weisse soured with Greek yoghurt and, if you make it into the brewhouse, here’s what Mattias says you’ll be able to enjoy on tap: “A heavily raspberry driven beer with a distinctive tartness from the souring process."

He's used wheat and oats to give it "a smooth and creamy mouthfeel", while promising the "moderate to high carbonation gives a spritzy tingling feeling on the tongue and marries well with the tartness." At just 3.5 percent ABV, he's designed it with summer sessions – or visits where you're required to drive afterwards – in mind too.

You can watch a short video of Mattias talking about the beer here.