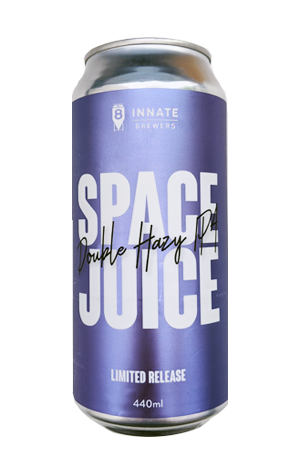 It’s tempting here to talk about Michael Jordan’s intergalactic basketball vehicle or the colloidal properties of juice in space - but nope, too obvious (and jammy in the case of the former), not to mention the fact NASA covered the later in ’98. I did consider discussing a possible pairing with Space Food Sticks but these were, unfortunately for the purposes of this article, discontinued five years ago. Instead, let’s address the beer at hand, which is the point of these things after all.

Double Hazy IPA. Right now, that could mean a lot of things, but for this astrally aspirational beverage it means a massive amount of oats plus El Dorado, Citra and Amarillo hops – interesting there’s no Galaxy... Although labelled hazy, the effect is NEIPAfication and, when paired with the beer's low carbonation, the palate is as smooth and creamy as a Weiss ice cream bar in which pineapple, mango, orange and grapefruit have been combined.

The 9 percent booze and late chalkiness provide texture to an otherwise juicy space jam suitable for post-Jordan games, physics discussion while orbiting, or simply knocking back as the decades turn.

Available in limited release from Innate stockists in WA