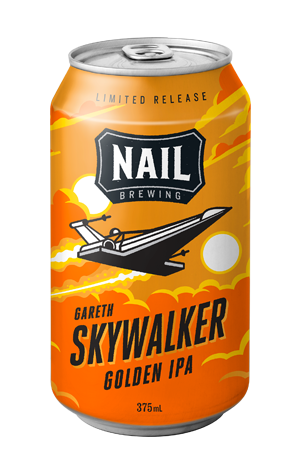 It’s one of the most well known chapters of Nail’s near two-decade history; however, for this particular release, it deserves revisiting lest the attention be consumed by a galaxy far, far away...

On Good Friday 2004, Nail owner John Stallwood was coward punched opposite The Monk in Fremantle, an event that almost killed him and changed the course of his life. The member of the public that chased his attacker and made a citizen’s arrest was Gareth "Skywalker" Tarrant, a man John didn't know but whose actions later allowed for mediation with the attacker and subsequent closure. Gareth was immortalised on the 2015 Skywalker Golden IPA debut and this re-up arrives in cans, featuring a Zendoke-designed "Nail starship cruiser".

It’s a lot to take in, and there's far more to the story, but in the glass this is very Nail: a well-made beer with a clear length that, in a Jedi mind trick of sorts, features more booze than the first can would have the drinker believe. Citrus and tropical characters – tangerine is the most overt – feature courtesy of Australian Melba hops with an anchoring piney undercurrent from Simcoe, among the other hops in the mix. Bitterness is tight and punchy and the palate lean.

Skywalker, in many ways, was ahead of its time, given rise of citrus and tropical characters in such beers over the past five years, and it’s a very fitting honour to bestow upon a good Samaritan, or simply a cracking beer to share with good people over Christmas.

Available from WA and SA Nail stockists in limited release