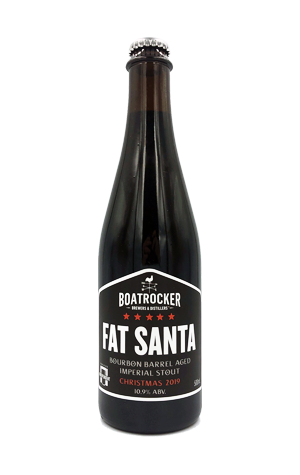 Boatrocker have released many barrel-aged imperial stouts over the years, some among the most sought-after in the country, with Fat Santa one of the more recent additions to the canon. It returns for its festive foray in 2019 with a slight change to the lineup of guest stars: the tonka, vanilla and coffee beans are all there once more but, this time, in place of local whisky barrels they opted for a first use Buffalo Trace bourbon barrel. And, boy, can you tell.

The beer is distinct from its predecessors thanks to the huge coconut character. When we cracked a bottle, we'd just been chatting about Lamington ales and started wondering if our minds were playing tricks on our palates as a result. We weren't: it's coconuty AF. There's rich chocolate and vanilla at play too, while a drying coffee and roasted bitterness provides the sort of balance we've come to expect from the brewery over the years, plus a little dark fruit lurking in the midst.

Should you overindulge this Christmas, there are far worse things to keep you company should you get stuck in the proverbial chimney.