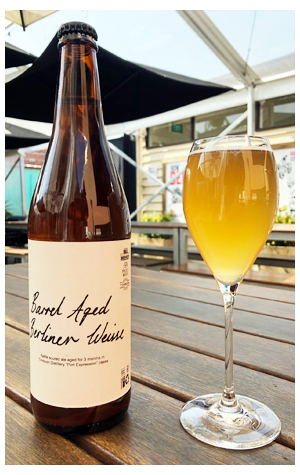 Twelve months earlier, I paid a first visit to the Queenscliff Brewhouse. The brewery was up and running and, at that point, the offerings were playing things very safe: cream ale; steam ale; English style mid; Aussie lager. Things had changed a little by the time 2020 arrived, with brewer Mattias Isaksson playing around rather more.

The luridly bright, raspberry-heavy Swede & Sour kicked things off, with a vibrant hazy IPA and this Barrel-Aged Berliner Weisse following soon after. The first batch of the former disappeared in little more than a week so we'll wait for it to reappear before adding to the site, but this beer was still pouring and has been put into bottles too. A collaboration between Queenscliff, sibling brewery Prickly Moses and Timboon Distillery, it does a good job of showcasing all the elements that went into it, which included three months in a former Timboon Port Expression barrel.

The oak is distinct in both aroma and to taste, while the experience is quite vinous, with a white wine like quality as well as hints of whisky alongside the sweet acidity. The finish is dry to the point of palate-quenching, with a little almond-flecked funk appearing late on.