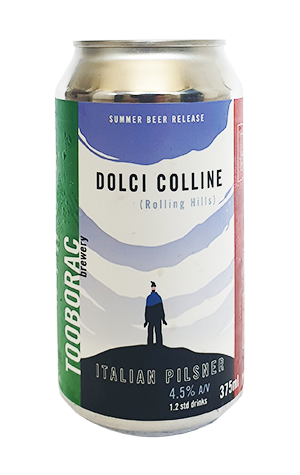 Sierra Nevada Pale Ale, Saison Dupont, Pilsner Urquell. All beers that have inspired countless imitations and all names that are treated with reverence by beer drinkers. Birrificio Italiano’s Tipopils doesn’t quite share the same recognition, despite the beer being an archetype of its own style. First brewed in 1996, the beer is often considered the classic Italian pilsner, a clean beer dry-hopped for aroma that's inspired the likes of Firestone Walker’s widely popular Pivo Pils and many other modern takes on the style.

That brings us to Tooborac Brewery’s summer seasonal can, Dolci Colline, which translates as Rolling Hills. A beer from a regional Australian brewery that uses German base malts and late addition German noble hops might not seem all that Italian but it’s certainly as true an Italian pilsner as any. You’ll find a big hit of a spicy and slightly perfumey aroma, with a little grassiness and a big bitter finish to an otherwise very clean, very drinkable lager.