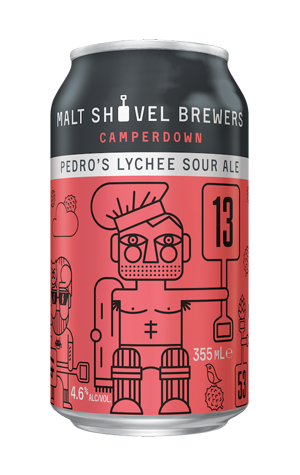 “We used a shitload of lychee in there, but the interesting thing is the lychee isn’t hugely dominant.”

When Pete – ahem, I mean Pedro – ran a few test batches of this beer in the pilot kit, the lychee flavour took over. But once they scaled the beer up to a full batch the lychee character backed off, balancing out to a subtle addition on the palate. So, so, this isn’t a lychee bomb. The fruit characters – a little passionfruit on the nose, lemon in the mouth, and lychee in the background – are secondary to a simple kettle sour base.

It’s light and refreshing, a champagne gold beer with a lick of lactic acid to cleanse your palate and ward off the overbearing summer heat.