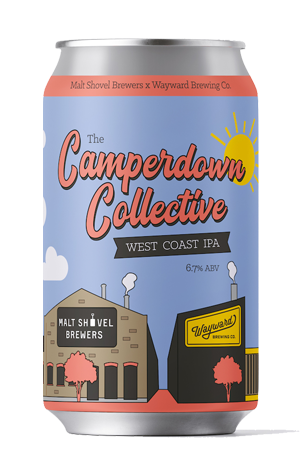 In 2015, Wayward Brewing moved into Camperdown – just across the road from the Malt Shovel Brewery. So what’d the Malt Shovel brewers do? They headed over helped them set up the tanks, and the two breweries chatted about how great it’d be to brew a beer together.

Well, it took four years, but they finally came together and made Camperdown Collective. It’s a West Coast IPA that remembers the days before the haze craze, drawing its flavours from the classic US hop varieties Cascade, Chinook and Centennial (Camperdown Collective is absolutely astounding at alliteration). Healthy additions of dank hops make it smell like you’ve crushed fresh hops in your hand, it’s chewy in all the right places, and it hits you with a fair whack of bitterness on your way out.

They brewed it at Malt Shovel. They labelled it at Wayward. They drank it wherever they could.