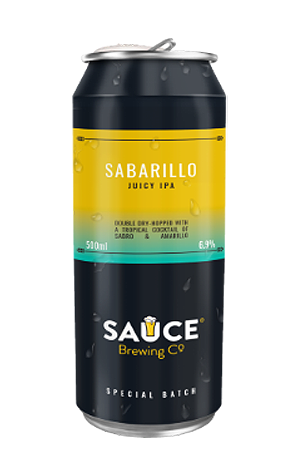 First there was Mosarillo. Then there was Mosalaxy. Now Sabarillo is here. The Sauce crew aren’t trying to win any prizes for most original names for these beers - they’re just focused on squeezing different hop varieties together until they explode into a juicy IPA. (At least, that’s my understanding of the brewing process.)

Double dry-hopped with Sabro and Amarillo (who’d have thunk it?), this beer has really got that piña colada thing going on. Smooth coconut comes together with freshly sliced pineapple - you know, the kind that makes juice run down your chin - and a garnish of mango, stonefruit, and melon. A little grainy malt and earthiness show up in the backend just as the unobtrusive bitterness makes itself comfortable.