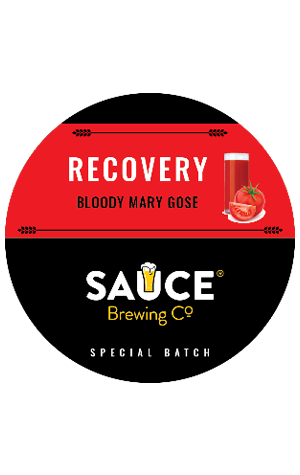 Cards on the table: I’m one of those annoying, self righteous people who thinks the best hangover cure is to avoid getting a hangover in the first place. So obviously I’m not one to turn to a Bloody Mary after a night of drinking.

All of this might make you think: “Why am I reading a description of a Bloody Mary beer written by this guy?” Good question. I don’t have an answer for you. But you are reading it. So strap yourself in.

Let’s start with the fact that Recovery is a 7 percent ABV gose. That tells you from the get-go that this is going to be an intense beer. But that’s the least of it. It’s then had tomato juice, celery salt, Worcestershire sauce and Tabasco sauce added to it. It’s red. It’s salty. It’s spicy. It’s tomatoey. This isn’t a beer that’s meant to slightly resemble a Bloody Mary. This is straight up a Bloody Mary beer. The most common response they’ve had from their punters? “Oh shit… it tastes like Bloody Mary!”

If you drink this at the brewery - or at another bar that follows Sauce’s recommendation - it’ll be served up to you alongside a bottle of Tabasco and a bottle of Worcestershire, so you can add to taste. I added extra Tabasco. I don’t know why. It seemed like the cool thing to do. It certainly made it pop, giving more capsicum on the nose, more tomato on the palate, more heat in the throat.

If we’ve learned anything today, it’s that this beer tastes like a Bloody Mary, and that I can take a long time to get that point across.