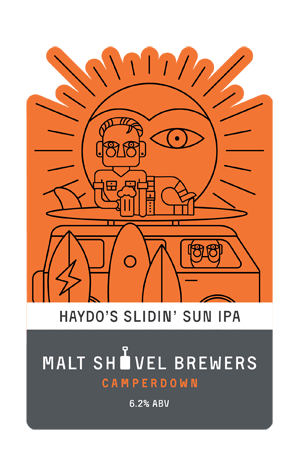 When IPAs first found their way into the Australian beer scene, they were often referred to as the big bitter beers that blow your head off (and of course, they still represent this to some people). But one look at the decal of Haydo’s Slidin’ Sun IPA - Malt Shovel’s head brewer Haydo reclining on top of the surf van while the deep orange sun sinks inexorably toward the horizon - and you get the sense this beer isn’t going to knock you out, but chill you out.

It’s beautifully bright, with a smooth body and a flavour that lasts and lasts. Six hop varieties, including a new and unnamed Aussie hop, bring a little sweet sticky resin and overripe paw paw, along with a medley of other fruits. Drink it down as the sun goes down.