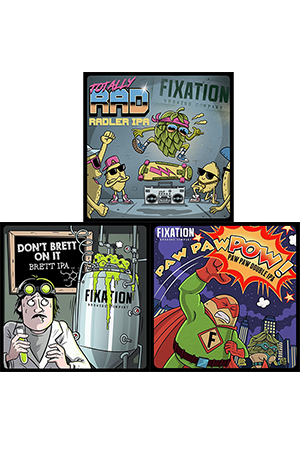 Fixation’s Collingwood home has well and truly been living up to its Incubator name, with head brewer Sam Bethune averaging a new beer every week. So you can’t exactly blame him for contorting his IPAs into all kinds of different shapes.

Of the latest trio, let’s start with the lightest and least IPA like of the bunch, *Totally Rad. The 3.2 percent ABV radler started life as a session IPA that was brewed with a mix of mint, thyme and the lemony hops Falconer’s Flight and Citra. The beer was then blended with lemonade at the end leaving an afternoon-light-drinking creation that mixes mint, a eucalyptus note, fresh lemon zest and an all-round homemade lemonade beer combo.

Don't Brett On It might follow a different brewing path but it still finds itself in that fruity-drink-in-a-glass space. The Brett-fermented hazy IPA is one that pushes a lot of ripe oranges, zesty lime and funky and tangy pineapple tartness.

That brings us to the final IPA plucked from the fruit bowl: Paw Paw Pow. The double IPA features the mix of Loral, Azacca and Vic Secret with the beer also blended with Queensland paw paw purée. The purée addition within a 7.8 percent ABV could easily make it land in sweet territory but instead there's a rather lean and balanced beer in which the prominent paw paw flavour is joined by mango, citrus, an earthiness and a bitter finish.