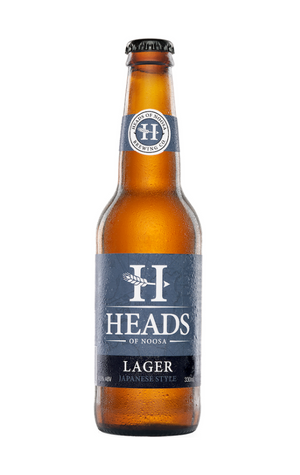 Who’d have thought the flagship beer of an Aussie brewer taught by a German brewmaster would be a Japanese-style lager?

Apparently rice lagers were invented as a way for Japanese brewers to sidestep some taxes, since they were taxed on malt but not on rice. It just so happens that rice in the mash also has a drying effect that’s ideal for lagers, tax break or no tax break.

Heads of Noosa’s Lager uses around 30 percent rice in their recipe, which is enough to dry it right out, creating a crisp finish on the palate that’s more refreshing than a dip in the ocean on a scorching January arvo. Clear in the glass, fluffy in the head, sweet on the nose, lean and clean in the mouth. This one cuts through the Noosa climate like a hot katana through butter.