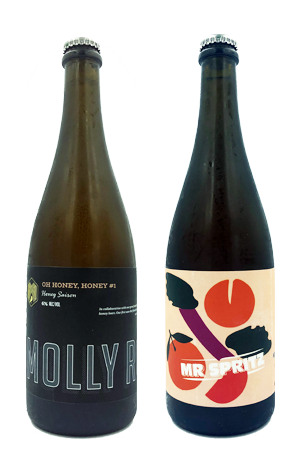 I love a good saison. And I've enjoyed a fair few from Molly Rose too, not least Matilde, the Brett saison that's as close to a core range beer as they've put out to date. But I can't remember the last time I enjoyed one as much as Oh, Honey. Honey #1 – be that from the hands of Nic Sandery or any other brewer here or overseas. But, before we get to the effusiveness, the background.

As the name suggests, it's a honey saison, or saison de miel, brewed with his old brewing buddy from their time at Stone & Wood, Tom O'Reilly, now at SA's Loophole Brewing and also the man behind mead-making operation Sunlight Liquor. Tom (who Molly Rose's Sour Tom was named after) provided inspiration and orange blossom honey, which was added with jasmine tea for refermentation in barrel.

Now the effusiveness. And, rather than go into too much detail regarding its character – the floral and softly spicy aromatics, for example – let's just say this: it's bloody wonderful. It looks just as a saison should in the glass, from hazy, glowing, pale golden hue to fluffy white head. It smells and tastes divine, is texturally just so, and finishes on point, with the honey contributing as much to the dry finish as it does to the aroma. I shared a bottle with staff at a crafty Melbourne pub and they were practically fighting over it.

Like many others, I've spent years trying to push saison as a wholly appropriate style for Australia without it ever gaining traction. Good. It means more of this for me.

None of which should detract from the other new big bottle release from Molly Rose, their Mr Spritz collab with Mr West. A citrus and rhubarb sour, it looks like a Bellini without the head and delivers a perfume of rhubarb, citrus peel, peaches and is rather floral too. Sprightly and zesty on the palate with a lingering sweet citrus acidity, it might not have stopped me in my tracks like its stablemate, but it's a delight in its own right.