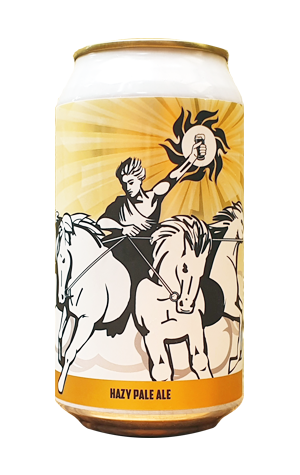 Helios already take the name of the Greek sun god, but their first seasonal release for 2020 takes things a step further in offering a dedicated salute to the solar deity. The label on their new Hazy Pale Ale bears his image riding a chariot before the blazing sun, and the top of the can is golden, as opposed to the black tops of the brewery’s other cans.

While it’s orange as the fiery orb itself, the beer doesn’t actually carry much haze. The tropical aroma we’ve come to expect from hazies is there in full, though, along with some grapefruit for bite. These fruits are joined in the palate by some water cracker character and piney bitterness to remind us the sun god Helios is all about sessionability - after all, he keeps coming back for more, right?