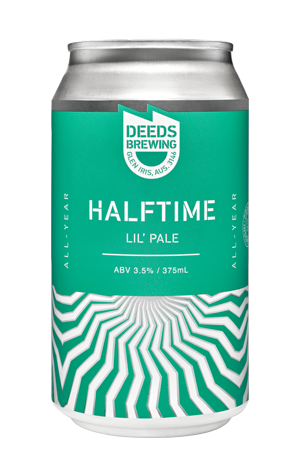 Given the beers for which they've best become known, if someone told you Deeds Brewing were going to slot a mid-strength into their lineup at a lower ABV than their Draught and Session Ale, what would you expect? Probably something hazy, pale and hop forward. And that's what they've delivered with Halftime, a "Lil' Pale".

Very hazy and a pale yellow, this new addition to their year round lineup from early 2020 matches lemon and light grapefruit hop characters with some pale malt sweetness, with some lingering, faintly resinous bitterness adding a crispness to the finish.