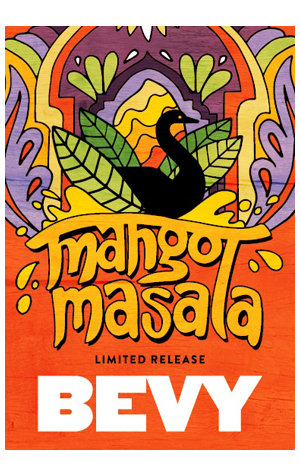 This ain't your average summer crusher, except that it kind of is.

Inspired by a two-month holiday in Kerala, a humid state in India's southwest, and guided by assistant brewer Alan Franco who was born in the region, Mango Masala maximises refreshment through the brewing lens of Southern Indian cuisine. Using a wheat ale base, Bevy’s brewing team worked closely with the Camfield kitchen to balance the adjunct mix, although Andy notes the final process was much like making a curry from scratch – “A little more of this, a little less of that. A lot of it's feel as you go along.”

With thirteen ingredients, the result is astoundingly cohesive, intriguing and drinkable. A heady mix of cinnamon, cumin and spice lead with implied ginger before mango rushes forward on the tongue. Amchur and tamarind provide a pleasant sour element and earthiness, which balances the low ABV – the spice mix helps mimic bitterness also – in what could almost be described as an Southern Indian NEIPA.

Interestingly, as an aside on the development of Australian beer, five years ago Mango Masala would have probably been a contender for the GABS People’s Choice award but in 2020 drinkers at The Camfield are quietly sipping Southern Indian inspired refreshment as black swans float past during Perth’s Indian summer – that in itself is amazing!