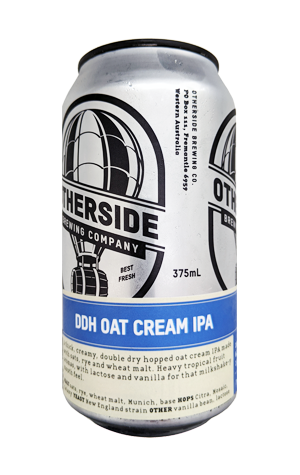 It’s becoming increasingly apparent the Otherside brew team have entered the sort of epoch of creativity and consistency which is normally only viewed retrospectively. Those paying close attention will have seen the Myaree brewery nail a spectrum of styles, almost in an offhand manner – “Hey, we made this. It’s in market if you’re keen to buy it”. They're making some of WA’s best beer and, for the most part, the liquid does the talking.

With the beer at hand, think skim milk milkshake IPA – all of the fun stuff without the flab. Yes, it’s creamy but also remarkably balanced, something the late bitter prickle aids while the mango-led tropical notes and soft grapefruit swirl with vanilla shake.

Otherside may not shout but the noise is getting louder and DDH Oat Cream IPA may well be one of their best.

And in limited supply from Otherside stockists nationally