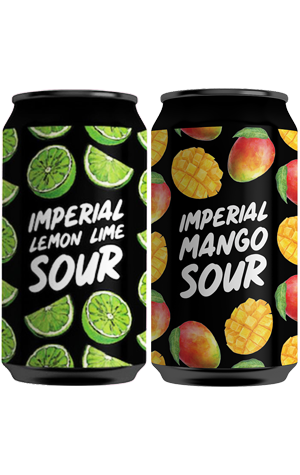 Hope Brewery aren’t new to the fruit sours game - their fruited Berliner Weisse variants have been around for a while, and many would say they’re up there with the best of them. But, while their sours are good, their imperial sours might be a game-changer.

The majority of fruit sours tend to sit below five percent ABV. Light in alcohol. Light in body. Fruit flavour is present. Lactic acid is king. But amp up the alcohol to seven percent, as Hope have done, and a shift takes place. More malt means more body and more sweetness to balance out the flavours. While there are plenty of sour lovers around who live for that blast of lactic, there’s also a market of people who don’t mind some sourness, but are always conscious of not wanting to tumble over the precipice into a chasm of face-puckering and involuntary salivation. People who find the idea of a fruit beer with a sour edge appealing, but have been burned before by acid bombs. Hope’s imperial sours are ideal for these kind of people - as well as for most sour lovers, if we’re being honest.

The Imperial Lemon Lime Sour brings a sweet and zesty flow of flavour that many of us will recognise from treats in our childhood: the tingle of a Solo; the tang of a Calippo; the zing of a Sherbet Bomb. Or, if we’re going to be more adult in our tastes: the palate-cleansing treat of a lime tart served with lemon sorbet. As you might expect, the sourness comes more from the sharpness of the citric acid than from lactic acid.

Since mangoes have no such natural sourness, the Imperial Mango Sour is all sweet in the aroma - that intense, concentrated sweetness that dried mango strips get from the crystallised sugars. But take a sip and the sour shows up. It can be a bit of a shock after the sticky confectionery smell, but then the slow release of pulpy mango flavour brings you back to a sweet finish.

While the increased alcohol is to thank for the full body and balanced sweetness, it’s somehow easy to forget that there’s actual alcohol in these beers - and a decent amount of it. One of my drinking partners paused during drinking to say: “I don’t feel safe drinking this. I’m having too much fun. I feel like something bad’s about to happen. Like the clown in the closet. He tells you he’s friendly, but I’m gonna scream anyway.”

A strange sentiment, but a compliment to the brewers, I think. Because we all deserve to have too much fun every now and again.