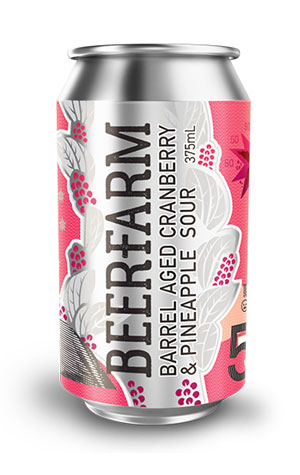 Recalls and withdrawals, while still infrequent, have become more commonplace in recent years as brewers push their experimentation into new areas and trade and consumers become better able to recognise (and reject) sub-par offerings. There can be upsides, however, and not just brewers improving techniques and standards and less bad beer hitting the market; in the case of Beerfarm, they've given one product they chose to withdraw from sale a new life.

After some careful consideration and a desire to reduce wastage in a similar manner to which they've been using fruit otherwise destined for landfill in their beers, they took kegs of last year's Pineapple Berliner Weisse – pulled voluntarily from sale after they were found to be over-carbed and still fermenting – and popped the liquid into barrels and left it to develop. Twelve months later, a portion of that beer was blended into a fresh batch of Pineapple Berliner Weisse and cranberries were thrown into the mix to add natural sweetness, contrasting the mouth-puckering tartness that had developed during the stint in oak.

The resulting beer is big on acid and punchy pineapple flavour. Some funk lingers on the palate but, overall, this Pineapple and Cranberry Berliner Weisse is all about the fruit.