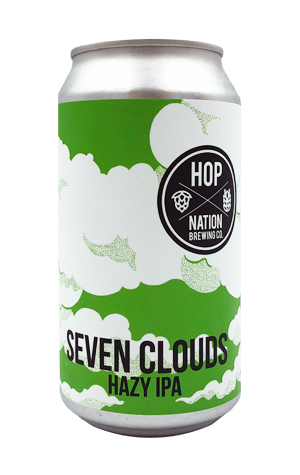 For Moorabbin bar and bottleshop Grape & Grain's seventh birthday, Hop Nation brewed a one-off beer. Except it's no longer one-off as it proved popular enough to bring back on a larger scale. As the name hints, Seven Clouds offers not just a nod to the birthday bash but also to the land across The Ditch with Kiwi hops Taiheke, Motueka and Nelson Sauvin chosen to bring the birthday wishes.

It's another hazy IPA from the brewery that does them well, this time with the addition of a lick of lactose, one that contributes to the beer looking like a slice of lemon meringue pie in the glass thanks to its curd like body and whitest of heads. The lactose is handled carefully, however, meaning the impact is arguably most obvious in the appearance. Elsewhere, it has the effect of softening the tropical, grassy hops more than sweetening the beer. Even on the palate it's far from creamy, with the bitterness still contributing a leanness and grip and the flavours predominantly tropical – mango. gooseberry and melon – and hop forward with the lactose broadening and sweetening their impact rather than creating a distinct character of its own.