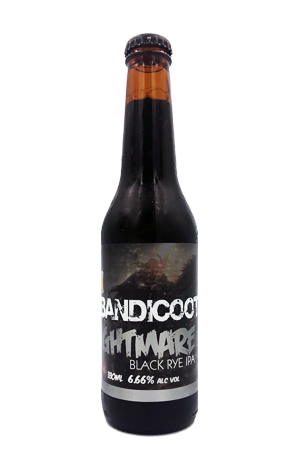 If a nightmare is regarded as dark, then Tracey Green chose the name of her black rye IPA well; it might be a couple of shades off black but, boy, is it impenetrable to light with the appearance of a heavy stout as much as a black IPA. It comes with an ABV of 6.66 percent too, just to keep up nightmarish appearances.

The Echuca brewers have held little back when it comes to packing a punch inside every glass too, from the treacly liquorice, bitter chocolate and hints of anise and spice on the nose to a body that's full and velvety yet comes with an abrasiveness courtesy of the hops. Indeed, it's there the hops really come to the fore, with the liquorice is joined by a herbal, drying bitterness in a beer that's a battle of malt and hops reminiscent of KAIJU!'s Cthulhu.