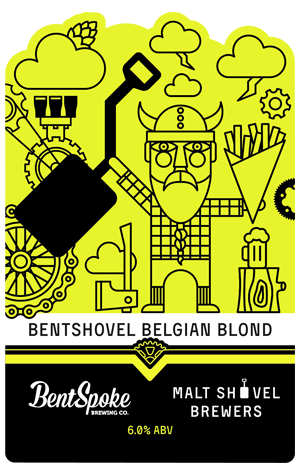 When you live in a bubble, it’s easy to forget what the world looks (and tastes) like outside the bubble. And in our Aussie beer bubble, we sometimes forget that flavourful but easy-drinking beers don’t have to be hoppy.

Malt Shovel Brewer Richard Van Grootel - the viking you see on decal wielding a bent shovel in one hand, and a delicious cone of fries in the other - went travelling through Europe in 2018 and was reminded just how good Belgian blond ales can be. He returned home inspired, but also disappointed at how difficult it can be to find a good one on tap here.

So when it came time for the Malt Shovel Brewers to brew their second BentShovel collab with BentSpoke, Richard suggested a Belgian blond. He worked on the recipe with Richard Watkins, BentSpoke's co-founder and head brewer, who had done a stint at the Malt Shovel Brewery back in the day, and the pair then brewed the beer at the Camperdown brewery.

Like last year’s extra amber ale, this year’s BentShovel isn’t afraid to show off its malt, but it’s the yeast that really shines. The aroma is full of those soft banana candies, but when you start to drink you’ll find the banana character isn’t sugary or sticky or sickly. Instead, it ties in smoothly with a steadily developing spicy clove flavour, the result of the brewers fermenting the beer quite warm.

While it’s more heavily hopped than a traditional blond, the New World hops tweak the flavours rather than dominating: Mandarina Bavaria brings citrus to the backend to complement the style, and Sabro brings its signature smoothness to round the whole thing out.

While it sits at 6 percent ABV, this Belgian blond drinks light, smooth and clean, and serves as a clear reminder of why such beers are so popular in parts of Europe.