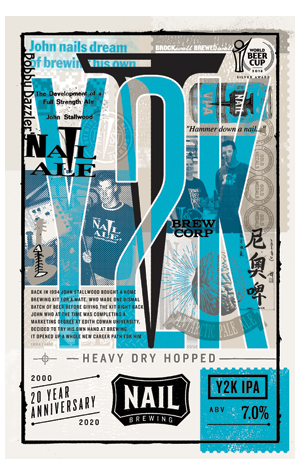 Since debuting in 2000 with Nail Ale, John Stallwood’s brewery has experienced a twenty year journey like no other. To celebrate this rare achievement, Nail have unveiled Y2K IPA, a beer he says showcases “double the dry hopping of Super VPA”. Safe to say, that's a ridiculous amount.

While Y2K may seem light years away from the “slightly more flavourful” ale he was trying to convince punters was worthy at the turn of the Millennium, it actually uses a near identical malt base to the OG beer in a recipe design which is equal parts old and new.

However, there's no doubt that twenty years ago even John would have scoffed at what Nail are calling Y2K’s "Heavy Dry Hop" regime (or HDH), which features Citra and Mosaic and, we're told, “is not an economical way to make beer”. But there is an anniversary to celebrate and Y2K does so with massive mango, apricot and peach aromas which segue into candied citrus – lime especially – on the tongue and a little white wine. The mouthfeel starts out juicy before bitterness and dryness increase, along with a lightly stippled booze, in what is a very modern IPA.

As for the name, John says laughing that: “We try to stay away from acronyms but they keep coming.” And with that, Y2K joins VPA, MVP and NBT in the uniquely Nail family of beers, some of which are now, of course, HDH.