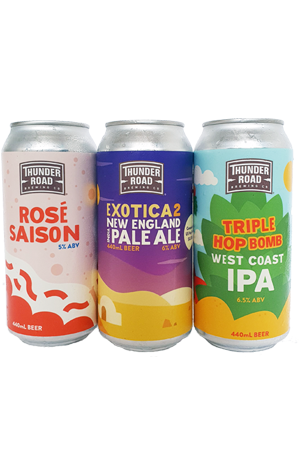 Thunder Road's Brewhouse Series gives the Brunswick-based operation’s brewers the chance to explore colourful beer styles in equally colourful 440ml cans. Typically the brewery likes to send them into the would in a flurry, as is the case here as numbers seven to nine are released together.

First among them is Rosé Saison, which pours an impressive pink due to the addition of native hibiscus alongside the wine grapes of the title. Despite the hue, it’s presents as a rather traditional saison, in which the yeast steers the beer in a spice and clove direction but where there’s also some pear and floral notes.

Next up is Exotica 2, a New England IPA that features the American hop Sultana. The hop’s known for its particularly impressive cone size, named after an Alaskan mountain range, and was only given its official title last year. In Exotica, a beer that pours a hazy pale yellow, it contributes lots of pine and some citrus that leans towards kumquat and pineapple.

Finally, there’s Triple Hop Bomb, a West Coast IPA that also makes use of a new hop, in this case one without a formal title as yet. HBC522 from Yakima Chief Hops is a variety that a few breweries have started play with, so a proper name is likely not too far off. The beer within which it features is bright and clear in appearance and fairly dank in nature with a mix of pine and grapefruit to the fore.