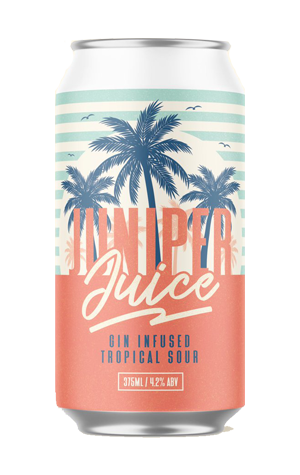 When it comes to gin and juice, who did it better: Snoop Dogg, Lou Bega, or Newstead Brewing? I’m tempted to vote for Lou Bega, since he linked it to a beer bust… but he loses out since he failed to follow through and make a beer that captured gin and juice. Newstead, however, put their money where their mouth is and collaborated with Brisbane Distillery Company to make Juniper Juice, a gin-infused version of their tropical sour ale.

The can label gets to work relaxing you straight away, as it captures a Venice Beach aesthetic - soft peach and mint hues with palm tree silhouettes - then brings the pastel palette into the beer with a powder yellow. But just when you're feeling laid-back from the visuals, the aromatics blow you away - the full nose of a gin cocktail hits with cardamom, cinnamon and peppery spice. These are the same botanicals that appear with the first sip of slightly tart juice, but chew on it and the lemon ironbark comes in, filling out the sourness of Newstead’s tropical sour base with a wave of citrus.

Newstead is one of the fastest growing microbreweries in Australia. We opened our doors in Brisbane in 2013 and already our beers are becoming widely available along the East Coast. Our brewery in Newstead is the best place to try our beers and has a top notch kitchen serving great food too. So pop in and see us and, when you show us you're a Cabal member, we'll shout you your first pint from any of the core range taps. Show me more