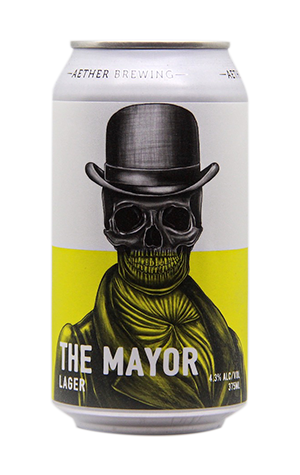 When Aether was situated in Milton, they first released this lager as “The Mayor of Milton”. The classy character on the label - a toothy-grinned skeleton wearing a bowler hat and a fancy coat - clearly ranked above any other Milton lager, or any other character smiling and wearing a suit and hat. Now that Aether is located in Northgate, this character is simply known as The Mayor.

He still has a little natural cloudiness about him. He still has the clean malt sweetness of a Euro lager. He still has slight grassy hop notes that pull together to bring a bitter ping to the crisp finish. But he’s no longer contained to Milton. The Mayor is wherever you need him to be.