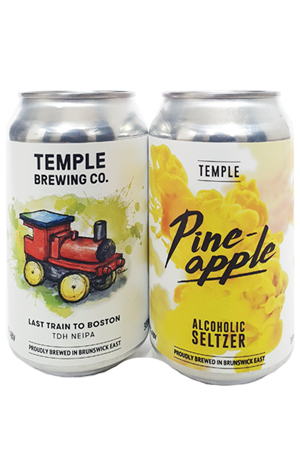 Temple Brewing’s twin tinnie release sees the Brunswick brewery arrive a little late to one party but nice and early to the seltzer soirée. Last Train To Boston is a NEIPA - the brewery’s first to get a wide release – and one that’s triple dry-hopped, thus enabling the brewery to give the beer an extra dash of modernity by calling it a TDH NEIPA. That heavy hopping regime also gives the beer a big hit of orange, along with mango and nectarine, in a soft, thick and entirely opaque beer.

Then there’s what’s in many ways the polar opposite: Pineapple Seltzer; it’s new, it’s completely clear and it sparkles. Made with a mix of dextrose and rice malt with the addition of pineapple juice, it’s a simple drink aimed at simple refreshment – and one that might take you back to a simpler time. It’s light, highly carbonated, refreshing and fairly dry, with the pineapple flavour bringing to mind the soft pineapple lollies you’d get in a mix bag at the end of a kid's birthday party.