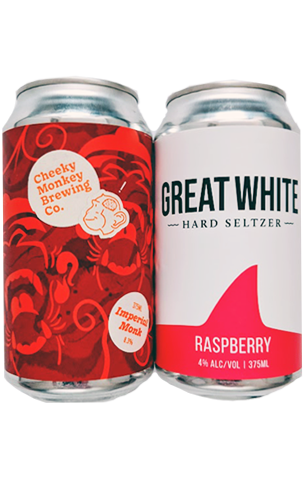 It’s a delicious dichotomy: in one can, the return of a much loved and highly rated imperial red IPA and, in the other, the debut of hard seltzer in a can from an Australian craft brewery.

Being a beer publication, let’s start there. Cheeky’s Imperial Monk began as a scaled-up version on the now defunct Travelling Monk mid-strength red ale, and has become an iterative, annual release. Where 2019’s was more of an imperial American red ale, 2020 is a straight ahead imperial red IPA. It’s a subtle difference but one that makes this edition drier, less chewy and, as a result, unveils a punchier hop profile from which earthy, herbal Centennial vibes anchor the citrus and stone fruit medley, sitting atop firm bitterness.

Which brings us to Great White Hard Seltzer. Put simply, if you’re not interested in a low ABV sparkling water, featuring natural raspberry flavour, 97 calories, less than a gram of sugar and no gluten, then this probably isn’t for you. And, while you could join the growing number of hard seltzer conspiracy theorists that suggest that it’s the root of the current global situation, you could also just find something else to drink.

However, if you are curious, which many are, then I am happy to report Great White is very similar to White Claw, a testament to Cheeky’s R&D for what is, on face value, fairly innocuous, especially when placed next to Imperial Monk. That, of course, is an unfair comparison. It’s not beer; it’s hard seltzer, and in that world, it’s very good. Pouring with magical clarity, Great White’s light spritz lifts restrained but fruity raspberries to a dry finish. That’s it. But will it be it for you?

Available now from the Vasse brewery and WA retailers.

Due to COVID-19 restrictions, the Caves Road brewery is currently closed.