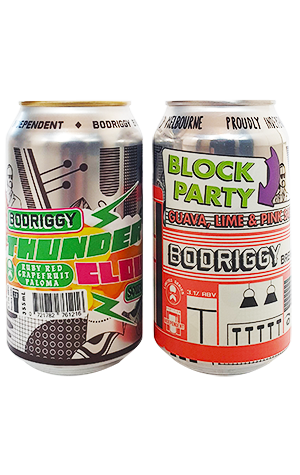 Bodriggy’s impressive venue might not be pouring beers for the time being but the space out back is still knocking out new releases to send into the world and for pickup from the Abbotsford Froff Shop. Block Party was brewed with Blackhearts & Sparrows to celebrate their new proximity after the bottleshop team opened a store right next to the brewery. The guava, lime and pink salt gose is in many ways familiar territory for the brewery, packed with fruit and highly quaffable. Mostly, it's those two fruits that do the heavy lifting, providing a tart, homemade cordial flavour that nudges up against a briney finish.

The brewers have also sent forth another beer in their Thunder Cloud sour IPA series. The previous release went big on peach and apricot; here, they aim to recreate paloma in hoppy beer form – West Coast IPA meets a grapefruit paloma. Tropical flavours are to the fore and, along with the grapefruit juice tartness, I also picked up some ripe mango that, in combination with a slightly sweet edge, make it a drink more suited for the pool party than the block party.