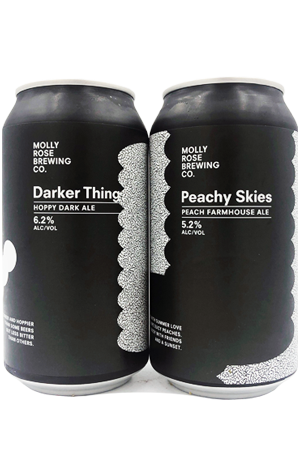 You'd think pretty much single-handedly building your own brewpub from which to properly launch your brewing company and then bringing your first child into the world would be more than enough for someone to take on in the space of less than a year. Throwing a pandemic and the subsequent shutdown of said brewpub into the mix likely wasn't on Nic Sandery's wishlist for 2020 yet, as with his peers in the beer world, it's been a case of adapt and keep the beers flowing.

Among the new beers available from what retail remains open, the new Molly Rose takeaway and home delivery service is Darker Things, which we're assuming is a follow of sorts to Mr Dark, one of the first of his beers to be canned. Pouring a deep mahogany with an off white head, it looks like a porter but doesn't take long to reveal itself as rather hoppier than that. Sitting somewhere between Yeastie Boys classic Pot Kettle and KAIJU!'s Cthulhu, you find the hops in combination with the dark malts creating sweet liquorice, dates, raisins and molasses like characters. There's cola, dark chocolate and a touch of espresso coffee bitterness in there too while, as is Nic's wont, it finishes dry, even as those rich flavours linger.

Also fresh in cans is Peachy Skies, a farmhouse ale seemingly designed to win over drinkers who claim they don't like farmhouse ales. It pours the colour of rockmelon flesh, with sweet peach aromas taking control first, a dash of lemon citrus on the nose too (presumably from the hops), and little in the way of spice or funkiness sneaking in from the farmhouse yeast. It's finely structured – clean, peachy and refreshing with herbal undertones and a clip of gently quenching acidity – and according to the labels designed to be enjoyed with friends and a sunset. Be warned, however, you might need more than one to ensure the sun has time to clear the horizon.