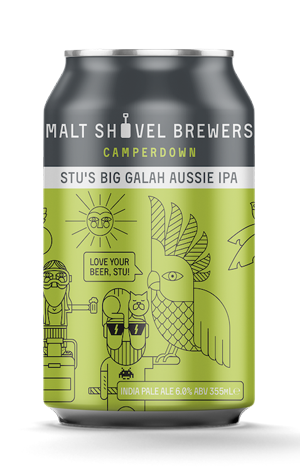 We all know the phrase “American as apple pie”. But do we have an Australian equivalent?

With Stu’s Big Galah Aussie IPA, Malt Shovel Brewers seem to be leaning towards “Australian as a big galah”. The IPA is certainly bright and colourful, even if that colour is the golden plumage of a kingfisher rather than the attention-grabbing pink of a galah.

How about “Australian as a day at the beach”? While ocean and sand are a distant memory for most of us during lockdown, the head on Stu’s Big Galah can remind us of the fluffy white froth of breakers at the waterline. And, unlike its American west coast cousins, this Aussie IPA isn’t thick or syrupy; rather, it has just enough body to give the impression of ripples in the inlet, or water lapping at the sand.

“Australian as shrimp on the barbie” might be another option, at least according to Paul Hogan or Jim Carrey. Certainly this beer could make a stellar glaze for BBQ prawns, bringing a fresh and fruity zing thanks to the Galaxy, Topaz and Vic Secret hops that do our country proud. Orange zest and herbs could hardly do better, and would only offer a fraction of the bold bitterness the hops provide.

In the end, it’s up to you which saying you go with. And while we’re on the topic of clichés, it’s tempting to use the phrase “dangerously drinkable” for this six percent IPA that goes down almost as easily as an XPA. But, honestly, this beer’s far too friendly to ever be described as dangerous. So don’t worry about how Australian it is, or how drinkable it is - just drink it, ya big galah.