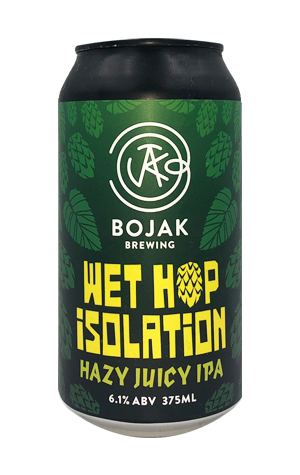 When you've built your business as a community hub based around a taproom that's been embraced by locals, being forced to close your taproom is like having the heart removed, cutting off the blood flow to the rest of the operation. On the flipside, when you've been embraced by your local community, they're going to rally around you in your time of need. And that's what's been happening at BoJaK Brewing in Melbourne's southeast, where they've switched to takeaway and home delivery and put more beer into cans as they focus on #keepinglocalalive.

Among the new beers in cans is their 2020 wet hop beer, neatly named Wet Hop Isolation. They secured 20kg of freshly picked Galaxy hops which were relieved of their oily goodness in the whirlpool before the beer was nudged further into hoppy territory via dry-hopping with Galaxy, Vic Secret and Citra.

The beer is tagged a "hazy, juicy IPA" (and "a pandemic of hops in a can" for that matter) and delivers on that promise. The deep yellow haze is as smooth as the beer is on the palate, with tropical, citrus fruits there from start to finish and a bitterness that ensures it finishes nice and clean without taking away from the juiciness.